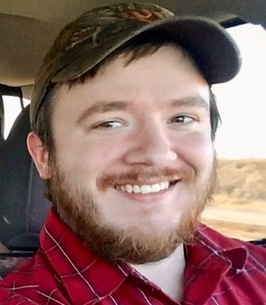 He is survived by his wife, Alayna; beloved dogs, Kacey and Hennie; parents, Ron and Ranae Riley of Minneola; sister, Madison Timmons and husband Tommy of Minneola; paternal grandmother Alta Riley of Derby; as well as many uncles, aunts and cousins.

Austin enjoyed being outdoors hunting and fishing or being on the water. He loved working with his hands. He often would give of himself by helping people with projects or building creative things out of wood. Austin was a Boomer Sooner fan to the core which he inherited from his parents. He also followed the Boston Red Sox.

Austin was a member of the body of Christ. He attended Grace Community Church and Country View Baptist Church.

Austin was a giver in life and his generous wish was that his organs could be shared with many after his death through donation.  His family honored this wish.

To send flowers to the family of Austin Monroe Riley, please visit our Heartfelt Sympathies Store.

We encourage you to share any memorable photos or stories about Austin. All tributes placed on and purchased through this memorial website will remain on in perpetuity for future generations.

DW
Offering my heart felt condolences to the Riley family.
Hold on to the precious time and the love you shared. May the God of peace and the love of family and friends console your hearts. May your hearts receive comfort from the promise God gives at Job 14;14,15.
Doris Walker - Sunday January 14, 2018 via Condolence Message
Share This:

Thoughts and prayers for you, Brenda and family.
Sue Shaw Messerly - Saturday January 13, 2018 via Memorial Candle
Share This:

I remember a very tense basketball game where lots of bad calls and unsportsmanlike things were happening and you ended up on the floor like it was a football game. However, you never stooped to their level. The crowd was furious; yelling at the officials. But the picture of your calm exterior, easygoing grin, and "It's all good" attitude, will always live in my memory. Great results of a son well - raised. You will be missed, Austin.
Jen Williams - Tuesday January 09, 2018 via Memorial Candle
Share This:

Our prayers are with the family. God bless you all.
April and Taylor Penick - Sunday January 07, 2018 via Donation
To: Austin M. Riley Memorial Fund
Share This:

Gonna miss you. Love you with all my heart. See you soon.
Ron Riley - Saturday January 06, 2018 via Memorial Candle
Share This:

Austin we loved you like a son. Roger always enjoyed being with you whether at work or play. You were a good worker and a neat all around guy! The hunting, track meets, and so much more. We were just not ready to say goodbye! Thank you for the last dinner we had together!
Roger and Doris Slaven - Saturday January 06, 2018 via Memorial Candle
Share This:

Praying His Grace and peace be with you.
So sorry Austin's death, we can't imagine...
Praying for Peace and Comfort of God's love for you all.

JC
Riley family, Prayers are what we depend on when our hearts are broken Jesus is holding you all and knows the deep sadness and loss, and pray He will hold you close. You are loved.
Jackie Cox - Friday January 05, 2018 via Condolence Message
Share This:

D
I’m so sorry for your loss. The Bible promises that in the very near future, pain and death will be no more. Revelation 21:4 says: “and he will wipe out every tear from their eyes and death will be no more, neither will mourning nor outcry nor pain be anymore. The former things have passed away”. Jw.org
My condolences are with you and your family at this time
Dana - Friday January 05, 2018 via Condolence Message
Share This:

KR
Pop's & i would like to share our condolences with you & your family. There are no words...

We have provided a digital copy (PDF) of the Memorial Program that we supply at the time of the service. To Download this file please click the filename below. Austin Monroe Riley - Memorial Program
Send flowers to the family
Choose from beautiful standing, table and basket arrangements. Safe and secure online ordering.
View Flower Arrangements
What has already been purchased for the family?
Place a Donation
Choose from a Family Preferred Charity or select your own.
Place a Donation
Family Log-In