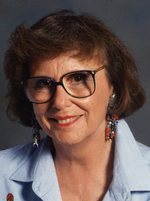 As a young mother, Gertrude was a busy farm wife and mother of five. She was a leader for the Santa Fe Trailblazers 4H Club and enjoyed attending school events, especially the band concerts. Later in life she enjoyed toll painting, cross stitch and gardening. Gertrude enjoyed playing cards with many of her lifelong friends. She was a supporter of the Haskell County Historical Society & Museum and was active in the Pride of Life.

She is survived by her daughters, Fawn Rizzo of Livingston, NJ, Kim and husband Dave Thornburrow of Manhattan, KS; sons, Jay and wife Janice of Pullman, WA, Steve and wife Janet of Sublette, Ken and wife Meg of Copeland; 10 Grandchildren and 4 Great Grandchildren; and sisters-in-law, Maxine Ellsaesser of Satanta, KS and Mary Malone of Alva, OK; and a brother-in-law, Walt Loucks of Phoenix, AZ.

She is preceded in death by her husband Paul; a son-in-law Richard Rizzo; a sister, Evelyn Weeks; brothers, Ray Ellsaesser, Russell Ellsaesser, and Chuck Ellsaesser.

A Memorial Tea is will be held 2:00 pm Sunday, September 2, 2018 at the Haskell County Historical Society and Museum in Sublette, Kansas.