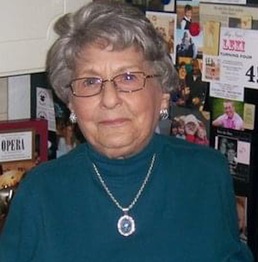 Jeanne Gildene Rookhuyzen, 98, passed peacefully early Sunday morning, December 13, 2020 at the Long Term Care Unit in Satanta, Kansas. She was born October 21, 1922 to Lillian Ruth (Sheer) and Gildo Joseph Clerico in Topeka, Kansas. Jeanne attended elementary school in Osage City, KS while living with her paternal grandparents. She joined her mom in Liberal for her freshman year of high school, graduating from LHS in 1940. She was attending Washburn University when Pearl Harbor was attacked, forcing her to leave school to help with the war effort. Jeanne returned to Liberal where she worked at the Liberal Air Base and met her husband, Lamar William Rookhuyzen. They married on January 15, 1944 in Amarillo, Texas.

Jeanne and Lamar moved to Redwood City, California  for several years before returning home to Liberal and starting a family. Born to this union were a daughter, Jamie Ann, and a son, Van William. Jeanne volunteered as a Brownie Troop leader and helped with Cub Scouts as well. She gave of her time to the local Red Cross and was dedicated to her church, St. Andrews Episcopal Church, serving on the alter guild for many years. She worked as a homemaker and was a wonderful cook. Jeanne always loved dogs and was a compassionate advocate for animals. She was a voracious reader, reading everything from light comical to romance to mystery novels, plowing through 5 to 6  books a week. Jeanne was a giver, helping anyone who was in need and was generous with her time.  In 2007, Jeanne relocated to Sublette to live close to her daughter, Jamie.

Jeanne loved spending time with her family; watching her grandchildren's sporting events was especially fun. She enjoyed watching basketball whether in person on or on television. Her favorite team was the University of Kansas Jayhawks, but like many grandmothers, she was heavily influenced by her grandchildren and would sometimes end up cheering for the K-State Wildcats.

She is preceded in death by her mother, Lillian Ruth Shore; her father, Gildo Joseph Clerico; and sister-in-law Margaret Clerico.

Cremation was entrusted to Weeks Family Funeral Home & Crematory of Sublette. Friends and family will gather in the spring to honor her life with inurnment at the Liberal City Cemetery.

Memorial contributions can be made payable to Great Plains Angels for Animals in care of Weeks Family Funeral Home & Crematory, PO Box 1200, Sublette, Ks 67877. Condolences may be left online at WeeksFamilyFuneralHome.com