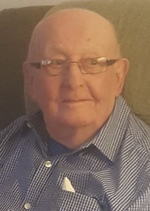 He served during World War II in the 3rd Army Engineers under General Dwight D. Eisenhower. Upon returning home, L.D. farmed with his father and worked in the oilfields. In 1948 he married Fern Karst. He was in the trucking business for several years.

On May 29, 1969, he married Cheryl (Smith) Henley. He was self-employed, conducting personal development workshops in addition to being co-owner of APX Printing for fifteen years with his wife, Cheryl. He was active in sales until December 2018.

He was a member of the Fraternal of Eagles #3124, Life member and past Commander and Quartermaster of the Veterans of Foreign Wars and life member of the American Legion. He served on the boards of the Garden City Downtown Association and the Salvation Army. He most recently was a dedicated volunteer for Mosaic.

Cremation has taken place. A private family service will be held at a later date. In lieu of flowers memorial contributions are to the L.D. Nieden's Memorial Fund. Please make checks payable to Weeks Family Funeral Home & Crematory, PO Box 1200, Sublette, Ks 67877. Condolences may be left online at WeeksFamilyFuneralHome.com