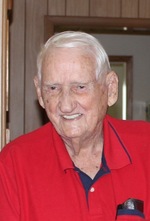 Shortly after graduating from Lakin High School, Bob was hired by CIG, where he worked for the next 40 years. He really enjoyed his work as a meter inspector and loved the time he spent driving in the country while doing his job.

Bob married Lesta Eden in 1953 and they were married for 65 years until her death in 2018. Bob and Lesta loved to travel, especially going on family vacations to the lake. They made several trips out of the country as well. Bob was an avid poetry lover and could recite countless poems that he learned in high school. After retiring, he and Lesta enjoyed spending their winters in south Texas, golfing and going to the beach. At home, he loved spending time with his family and cats, reading magazines, and golfing.

He was preceded in death by his wife of nearly 65 years, Lesta Stewart.

Cremation was entrusted to Weeks Family Funeral Homes & Crematory of Sublette. The family will gather to celebrate Bob’s life at a private memorial service at the Elkhart Cemetery.