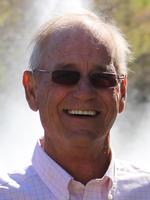 Wes enjoyed being involved in his community. He served on the Haskell County Cemetery Board, Tri-State Feeders Board of Directors and the Sublette United Methodist Church Board and various committees. Wes enjoyed being in the great outdoors; fishing, working cattle or being with his horses. He was a 4-H Leader and was instrumental in starting the Breeding Heifer Program. He coached girls’ softball for many years and was an avid supporter of his own girls’ sports activities throughout their school years. Wes loved his family and would drive miles to see his grandchildren; they meant the world to him.

He is preceded in death by his father, Raeburn Powell and his brother, Les Powell.

Friends may pay their respects and sign the Memorial Book on Wednesday, October 25, 2017, from 10am - 6pm at Weeks Family Funeral Home & Crematory. The casket will be closed.

Funeral Service will be held Thursday, October 26, 2017, 2:00 pm at the Sublette United Methodist Church, Sublette, Kansas. Interment will be at the Haskell County Cemetery immediately following the service.